Social Networking software is one of these technologies that has just sneaked up over the last 5 or so years.  We have sites like Twitter, Facebook, Bebo, MySpace and LinkedIn all vying for marketshare attention.  Like all new business areas, segmentation is occurring with Bebo aimed towards kids, MySpace adults and celebrities etc.  Over time, I am sure we will see accepted leaders in the same way Google leads the search engine pack.

For a number of years, we have seen small clusters of information sharing sites aimed at specific disease types.  PatientsLikeMe was one of the early success stories with an initial focus on ALS (Lou Gehrig’s disease).  It is beautifully written with a user interface specifically designed to be accessible and approachable. [It is also open source, and written on the modern new platform – Ruby on Rails].  Sharing experiences, discussing issues with other sufferers, and learning of potential therapies when dealing with chronic debilitating diseases is an ideal target for the social networking concept.  For something like ALS, where patients are geographical dispersed, a site like this can act as a electronic ‘drop in centre’ providing a level of support not possible with any other mediums.

An example on PatientsLikeMe is one of the focus communities that supports Devic’s neuromyelitis optica.  This is an incredibly rare disease, often confused with MS that only effects a few thousand people in the world today. As of July 2009, the site has a community of 140 suffers, more than 5 times the population of the largest published clinical study.  The home page for this site is a lesson on how to provide a site that the target users will return to; 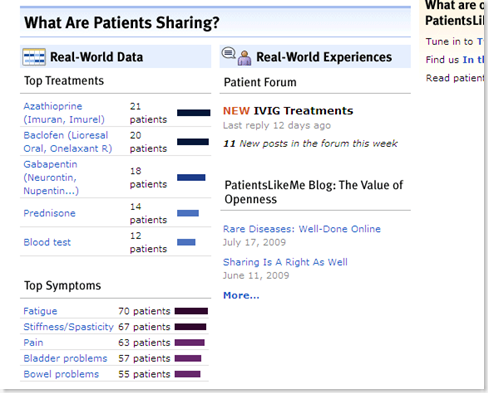 Without having to login, or register, the site show a list of treatments and symptoms that have been shared by the 140 patients that have previously registered.  What better way to encourage mutual sharing and involvement!

A replacement for Traditional Clinical Trials?

To a degree PatientsLikeMe and other health focused social network sites are providing an open source equivalent to clinical trials.   Clinical trials are highly structure organized affairs, tightly bound by regulations and rules.  In this way, they are similar to a formal software development approach where specifications are prepared, code developed and testing carried out.  Compare this to open source community approach in software development. Thousands of individuals all  contribute, self regulating, to create products that many would argue are as good, or even better than their commercial cousins. With social networking health sites you have a very large community all contributing on an ongoing basis both in terms of the raw data, but also, the analysis of the raw data to determine trends.

With a typical clinical trial, a subject with be interviewed by an investigator, measurements taken, and information recorded into a system according to pre-prepared protocol.  Together with the terms of the protocol, the investigator will be in a position to make an assessment as to whether the subject is sufficient compliant for the corresponding data to be considered part in the overall data set going forward.  With a patient community approach, the compliance with an fixed regime, or protocol will be limited.   The sample size must therefore be considerably larger in order to make any kind of assessment based on the results.  Also, there are considerable challenges in determining the degree of compliance. Statisticians would most likely struggle to offer up a statistically safe trend based on the variability of the surrounding conditions, many of which would potentially be un-recorded.

How about as an entry point?

Nothing new here of course – PatientsLikeMe are already partnering with commercial companies, but, potentially a more open approach would be to create bridge between the community and the commercial world by leverage standards to create an opt in gateway.  Sponsor companies could publish a set of entry criteria and schedules for clinical trials through a protocol standard language (CDISC PRD ?) push approach. Community health portals could utilize these criteria to determine a filtered list of individuals that comply and then give them the opportunity to opt into the published study.

Maybe it would be a shame if the ‘big bad’ commercial world started to spoil these not-for-profit community led efforts.  I am not sure.  I think both could benefit.  Patients that suffer these diseases are actively looking for therapies and help.  If the drug companies are better able to target and develop these study therapies, then surely it is a win/win.

Source to eSource with EDC